Covering symptoms of low blood pressure in pregnancy, in children, in elderly and remedies

It appears people who are out to be in shape via exercise such as sports persons, people with ideal body weight and not obese as well as people who do not use tobacco or alcohol have generally low blood pressure.

Insufficient blood pressure levels will show through symptoms of low blood pressure such as chest pain. This happens as blood fails to reach coronary arteries in sufficient volumes. A heart attack may even occur. Blood has to constantly visit the kidneys in sufficient amounts and pressure to dump body waste such as urea and creatinine. An increase in the levels of these toxic substances may lead to kidney failure.

Hypotension symptoms in pregnancy, in children and in elderly people will also include fainting, dizziness, blurred vision, lightheaded and orthostatic hypotension discussed earlier.

Low blood pressure remedies will include making sure that a dehydrated person is adequately hydrated by drinking enough fluids especially water. This increases the volume of fluid in the blood stream thereby significantly boasting blood pressure. Ironically low blood pressure treatment seeks to do in reverse what hypertension medications aim to achieve. Treatment may also include intravenous fluids administered by qualified health professionals.

Anti-hypertensive remedies involving cutting on amount of sodium consumed per day. In treating hypotension, on the other hand, a salty diet is required for a period of time until blood pressure levels have been restored to adequate levels. It follows that investing in an accurate blood pressure equipment such as the Omron monitor series is essential. This will enable home tracking of own blood pressure developments as treatment continues. 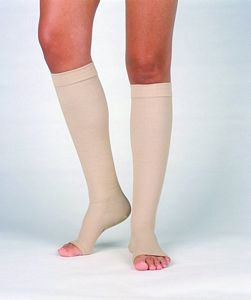 In the case of pregnant women with symptoms of low blood pressure, doctors might recommend graduated compression stockings [pictured]. These promote blood circulation in the legs. Blood naturally flows upward in your leg veins to the heart. The stockings are designed to apply an amount of pressure near the ankles and less and less pressure up the leg helping to push blood up.