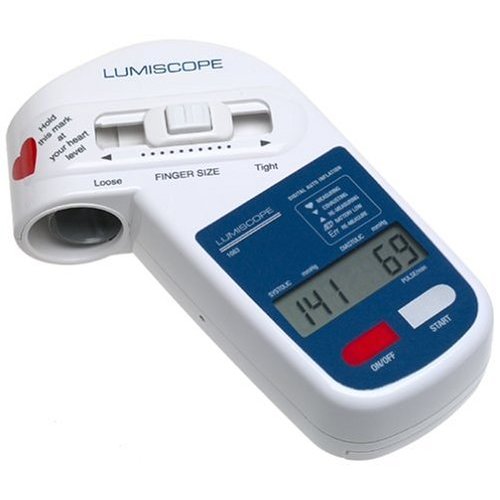 Finger Blood Pressure Monitor | No longer as popular as it previously was, the finger monitor is easy to use and also portable. It is generally accepted by children as it is less intimidating. Some reviewing users have noted that their medical practitioners have recommended the product before as an accurate and purpose serving investment. Yet some users have complained of inaccuracies with one noting that readings of 110/68 mm Hg were consistently given when their correct blood pressure was actually 140/94 mm Hg.

The device has a screen which shows digital readings of the user's blood pressure. Apart from giving systolic and diastolic blood pressure measurements, the device also calculates pulse rate.

As a downside the finger monitors are very sensitive to body temperatures and even positioning of the patient. This leads to inaccuracies that might require repeated measurement and averaging the results.

Hygiene issues are naturally important when dealing with medical issues. However, the finger blood pressure monitor puts an extra burden of requiring users to wash hands before inserting a finger into the finger cuff. The finger cuff can be difficult to clean raising the possibility of developing infection due to microbial contamination.

One of the most popular brand of finger monitors is the Lumiscope Automatic 1083N which has now gone out of stock at Amazon. The device comes with built-in memory and memory recall including a large digital display and AAA batteries. The popularity of finger blood pressure monitors appears to be fading which might explain their disappearance from leading marketplaces such as Amazon.

An almost balanced number of surveyed customers gave two different opinions on the finger monitor. About half of those asked to give a review on different marketplaces found the product fabulous and the other half expressed extreme disappointment with the device.

Customers who gave positive feedback noted that the finger monitor gives accurate results consistently compared with the wrist monitor and the upper arm cuff monitor with the wrist blood pressure monitor rated the worst. Some consumers have claimed using the device for as long as 7 years with accurate results. Some have confirmed that users with smaller fingers might find trouble using the gadget as in their own experience it worked much better on thicker fingers that fit snugly into the finger cuff.

Of those who gave negative feedback, they complained of the noisy and inaccurate operations of the finger monitor. They particularly found it annoying that the finger monitor particularly the Lumiscope 1083N keeps beeping when in use. This tends to be disturbing especially when concentration is needed or were the environment does not permit noises. These consumers also note different readings produced by the device compared with different types of blood pressure monitors employed.