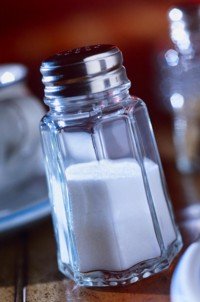 The mechanism behind the combination of salt and high blood pressure is fairly easy to understand and appreciate more so for those who have worked in the kitchen before. Salt absorbs moisture and becomes dump even in an ordinary salt shaker. This outcome is a clear and concise illustration of sodium retaining water even in your body.

In fact hypertension medications such as diuretics reduce blood pressure in patients by excreting excess water via urination. Diuretics users for this reason have a higher frequency to the restroom compared to an average non-hypertension or non-diuretics user.

Regrettably, despite these apparent negative effects of sodium on high blood pressure, millions of people many of whom are unaware of their hypertension status consume on an ongoing basis vast amounts of sodium 130% above the daily recommended amounts. The American Heart Association (AHA) recommends a daily sodium consumption of only 2300mg or even as low as 1500mg. Yet on average adults consume 5300mg as their daily average.

The recommended dietary approach is that of eating lots of fruits and vegetables with much less sodium intake which is largely consumed today via processed foods. Checking food labels is becoming a very important routine when replenishing home supplies in order to control how much salt we consume.

What might be different is taste, processing and texture. All in all the health effects are the same because the chemical markup of the salts is similar. Rock salt is no different from fine salt. It is also known as common salt, table salt or halite and is an ionic compound with the formula NaCI. The difference between rock salt and table salt is in the size of the salt particles. Rock salt is used for industrial purposes in chunky crystals. Kosher salt is also harmful to blood pressure patients and is sometimes sold in chunks. It is called kosher because of the curing process that produces it.

Unlike the salts discussed above, celtic salt is healthy salt deliberately produced to protect the body from the negative effects of sodium chloride especially on blood pressure. Celtic salt has been associated with blood pressure normalization. It therefore does not negatively affect your blood pressure. It also has some additional health benefits which includes relief of sinus and bronchial congestion, restful sleep and the ability to dissolve kidney stones amongst other benefits.